My Spouse or My Kids?

My Kids or My Spouse?

You married for love. You married forever. But you never expected your marriage would involve having to choose between your new spouse an...

Communicating so your Kids Can Hear You 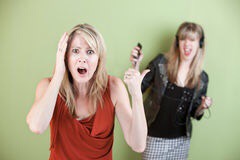 How much information do your children need in order to do what you require from them? Over load or insufficient data?

This morning I was trying to choose between one power supply that said “output: 8.5 Amps” and another that said, “output: 500 mAmps.” >sigh< unable to find my old college math books, I consulted my next favorite source, Google.

Three hours later, after learning about basic quantum electronic theory and the origin of lightning-based home-schooled electromechanics, I stumbled upon a simple converter that told me, with the click of a simulated button, which one was more goo-er-er.

These days, we have WAY too much information available for the efficient delivery of answers to befuddled, overworked humanoids.

WHAT INFO DO KIDS NEED FROM PARENTS?

In our oversaturated, overstimulated, overinformationalized society, I am seeing so many cases of mis-communication between parents and their kids. We moan about a lack of respect from our children, when – I suspect – the problem is really a lack of connection.

Parents have lately become victims of “Explain-itis” when it comes to giving directions to their children. The directive to stop hitting a playmate slowly melts into a long, dry lecture on the reasons for mutual respect, societal order, individuals’ personal rights versus self-esteem, and all the other catch words spewed out by everyone from the media to Facebook to educational flyers.

By the time a well-meaning parent has explained the psycho-social theory behind playground fairness and mutual concern for the planet, the poor child has forgotten what the lecture started over. And he has lost a little more respect for Mom’s or Dad’s intellectual usefulness.

A simple, “Tommy! Stop hitting that boy! Now, apologize to him; shake his hand; and get in the car, we’re going home,” is an excellent delivery of the necessary information and steps to be taken for Tommy to end the inappropriate action, reconcile with the other child, and begin his next action.

Our children’s minds are not developed, until their mid-twenties, to incorporate and process complex multiple streams of information. The most effective way to instruct them is with simple directives, delivered in a straightforward order, so that they can process one step at a time.

Long detailed explanations about why some actions must be taken, are best left for later, perhaps at bedtime when the excitement of the moment has passed.

If you spend too much time carefully enlightening your child about the engineering facts of the internal combustion engine and the momentum-to-surface texture friction ratio required to halt a moving automobile – you may end up finishing the explanation in an ambulance on the way to a hospital.

Just like I was distracted and confused by all the in-depth discussions about amperages, your kids don’t necessarily need to understand the “Why” and the background, as much as they need to know What you want them to do first, second, and third.

Posted by STEPcoach No comments:

Whether you are establishing a secure link to your bank’s website, or attempting to keep your teenagers out of your computer, passwords are a fact of life in today’s online world. And passwords can be both a blessing – as they keep information safe – and a curse – since they are often so bloody hard to remember.
When I begin to play “The Password Game,” my wife just leaves the room. She says she doesn’t want to hear my explosions of rage as I try every password I have ever used, as well as, of course, as the one I set up for the stupid site! I have no idea what she’s talking about.
The following article, from The Dictionary Blog, offers some good advice to keep your surfing secure and, hopefully, non-violent.

Posted by STEPcoach No comments:

If you're new here, READ THIS FIRST You Are Not Alone
then READ THIS: It's Easier Than You Think

Protect your children from the damage of divorce

Guiding Your Children through Divorce

Your comments not only let others know what you think, they help boost our ranking so more families find us.
PLEASE LEAVE A COMMENT! even if it's just a word or two! (just click on "comment" at the end of each article)

Meet the most important Person in my life

Visit these links to find help for your family:

Submit this blog so others may find it