My Spouse or My Kids?

My Kids or My Spouse?

You married for love. You married forever. But you never expected your marriage would involve having to choose between your new spouse an...

Saw much more than I wanted to again this morning of a young lady as I was heading into my favorite family restaurant. I wondered if they were switching to Hooters or the Playboy club, but no, it was just a girl going out for breakfast during the Summer. Her tiny shorts were more like a bathing suit bottom than short pants!


And I thought again, "Does her dad have any idea she's flashing his daughter around like that?" He may, or he may not care. The "standards" today are almost non-existent.


And before you start calling me a prude, think how our new standards are affecting life in the US. Rape, physical assault, and attitudes about what's normal have been changed immensely in just the last 20 years. Just one generation ago, prostitutes weren't allowed to wear in public what our precious children now wear to the mall, restaurants, or even church!


"B-b-but," you stammer, "what can I do about it? She's practically a grown woman! I don't have any right to criticize her, do I?"


In Deuteronomy 4:9, we're instructed, "Be careful never to forget what you yourself have seen. Do not let these memories escape from your mind as long as you live! And be sure to pass them on to your children and grandchildren."

In other words, you are to tell your kids what you've learned about the results of being too loose and unconcerned about your body, morals, or reputation. You, yourself will suffer from how your children display themselves in public, because anyone who sees your daughter running around nearly naked is going to place most of the blame on you for the way you brought her up and what you didn't teach her. You will be judged by how you have raised your kids ... you know that. You feel it every time your kids throw a fit in public and everyone's eyes swing from the kids to you.


Then, there's the repercussions on the kids, themselves (and your grandchildren, too). Jeremiah 5:7-10 says:


"How can I pardon you? For even your children have turned from me. They have sworn by gods that are not gods at all! I fed my people until they were full. But they thanked me by committing adultery and lining up at the brothels.

8 They are well-fed, lusty stallions, each neighing for his neighbor’s wife.

9 Should I not punish them for this?” says the LORD. “Should I not avenge myself against such a nation?

10 “Go down the rows of the vineyards and destroy the grapevines, leaving a scattered few alive. Strip the branches from the vines, for these people do not belong to the LORD"

Wow! What a clear picture of our kids today! They've been given everything, but they've turned their backs on everything we know and should have taught them to respect! "Well-fed, lusty stallions" indeed! Doesn't that sound like the boys strutting around demanding respect they've not earned?


And then God almost cries out His frustration over how our kids act (and don't you feel it, too?) "Shouldn't I punish them for acting out so badly?"


Don't you owe it to your kids to warn them what they're doing to you and themselves and to their children? Whose responsibility is it to teach them right from wrong, if not yours? And who will have to deal with the results of their falling away from the standards that helped raise them?


One last point: The time to teach your adult children right from wrong is Now. Proverbs 22:6 says


"Train up a child in the way he should go: and when he is old, he will not depart from it."

Start with your preschool kids, teaching them modesty. Continue into elementary and middle school, guiding them to wear decent clothes, not the latest fads that try to turn little girls into adults too soon. And keep after them as teens to act in a way they will be proud to look back on as they grow up.


Whether they're your biological or your stepkids, you are the ones responsible to demonstrate a good example. As a stepdad, I wasn't directly held responsible for how my stepdaughter looked and acted, but I had the opportunity to guide her toward how she should act and what she should expect from boys she dated.


If it's tough - it's just part of parenting and stepparenting. But you'll be proud of them later on when they continue to live the way you've taught them.

How to Not Get Bit 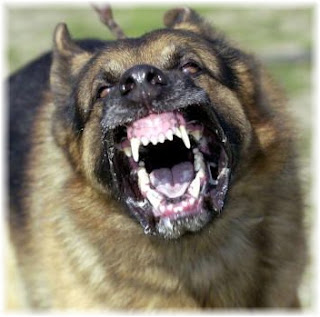 My ol' Pappy used to say (as Rockford would put it) if any of the neighbors ever get a puppy that has any chance of turning into a big, mean dog, As quick as you can, get to their house with some hamburger and a doggy toy.

That way, when that puppy grows up and gets out (and he will get out sometime!), he'll always remember you as his buddy and be less inclined to rip you limb from limb.

Well, the same holds true - for those of you with the common sense not to get bit by a mean dog - for stepparents and stepkids.

If you marry someone who has a child you don't get along with too well - which is to be expected since you're the stranger who's intent on stealing their parent - you might do well to keep on that child's good side. Because one of these days that cranky-but-small child will turn into a large, sullen teenager, then a larger, sullener adult.

I'm not talking about bribery ... not out right, anyway. But, just as it makes sense to get the puppy on your side with some hamburger and a play toy so he won't bite you later - it also makes sense to be the person who that large, sullen teen has a good relationship with.

And, besides just protecting your own rear from getting chewed off by a full grown attack dog, that teenaged boy or girl may need an adult they can trust when the mean-uglies come calling at 13 or 16 years of age. Many a grown-up attributes their salvation to an adult friend when they were in the crabby years. You could be that savior who keeps them from melting down.

Your spouse - the puppy's stressed biological parent - will undoubtably appreciate your efforts too, which can only mean good stuff for you. Some bio-parents have been known to get all moony eyed and cuddly at the sight of their new spouse and their child happily involved in any activity that keeps the child quiet and off their back.

So instead of seeing that stepchild as a challenge and a potential improvement project, try looking at him or her as a soon-to-be play buddies whom you can take to ball games, movies, and out for pizza. Mom or Dad will love you even more, the puppy in question will feel less need to chase you away, and you an feel good about yourself for avoiding a daily battle with a big ol' hairy attack dog!

Bless each other (or else!),
STEPdad Bob Collins
Posted by STEPcoach 1 comment:

If you're new here, READ THIS FIRST You Are Not Alone
then READ THIS: It's Easier Than You Think

Protect your children from the damage of divorce

Guiding Your Children through Divorce

Your comments not only let others know what you think, they help boost our ranking so more families find us.
PLEASE LEAVE A COMMENT! even if it's just a word or two! (just click on "comment" at the end of each article)

Meet the most important Person in my life

Visit these links to find help for your family:

Submit this blog so others may find it